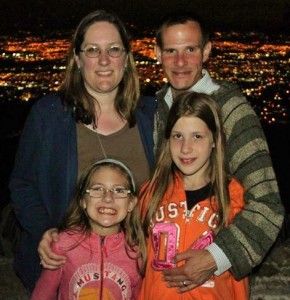 My earliest memories are of violence, being physically abused at 3 years old. My biological dad abandoned us, and we were left with my mom and her abusive boyfriend. I ended up in the hospital from the abuse and when my mom was given the choice of her kids or her man, she chose him. Torn from my sister, I was thrust alone into the foster care system.

There must have been 20 different homes and I was never in one school long enough to make friends. I remember thinking about suicide at age 5. My only escape was reading and I devoured books wherever I went.

I was adopted at 7 and as part of a large foster family, felt like just another face in the crowd. But there was one person, my adoptive grandfather, who told me ‘You are wanted here.’ I didn’t really believe him yet I knew he meant it and that stayed with me. Like many adopted kids, I had fantasies about my natural parents and, when I was older, tried to go back. The reality I found was drug addicts and alcoholics. I tried to resist but ended up going headlong into drugs. For years it was a living nightmare. I was kicked out of the Marines. I burned bridges. I was snorting heroin and worked a second job just to pay for my drugs. Finally at 26, suicidal and desperate, I asked my adoptive family for help. Their answer: you need Teen Challenge.

The Teen Challenge program I chose was Detroit Life Challenge. What I didn’t know was that God was involved. And what I heard right off the bat from Pastor Dave Ytterock was: ‘I have bad news and good news!’ he told me. ‘The bad news is God is very angry with you because of your sin.’ I thought, ‘Great! Because I am angry with Him too!’ But then he went on, ‘The good news is that God sent His Son Jesus to pay for your sins and redeem you.’ I was confused. I had said I would try three months in this rehab but had no idea the Bible would be drilled into me endlessly with teaching and scripture memorization. And my passion for reading? I could indulge it all I wanted…with the Bible. But I was unruly and unwilling and I was kicked out of the program twice before my final stay.

I don’t recall exactly when during that final stay the Lord got ahold of me and I fully repented and surrendered. I do know that it was the Word, specifically Ephesians 2:10 (‘For we are God’s handiwork, created in Christ Jesus to do good works, which God prepared in advance for us to do.’) that brought on my epiphany. He had a plan for my life before the foundation of the world. Wow! I was not just another face in the crowd. I had a heavenly Father Who made me, loved me, had purpose for me. I had a Savior, Jesus, Who redeemed me. I finally belonged. I was finally free from sin, from addiction. That was 17 years ago. I served as an intern and staff member at LC, met my beautiful wife Darla there, went on to Bible college, had a family, and a successful career. But is it any wonder when Pastor Jeff called me about the opportunity in Toledo, that Darla and I answered the call with a resounding yes? After all, there are desperate, hurting addicts out there. And I have bad news and good news for them…