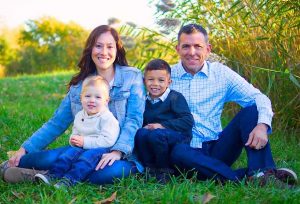 Daniel and Barb met in ministry school. Their courtship was whirlwind, their love intense, destined for marriage and happily every after. Almost as whirlwind was Daniel’s relapse back into drug addiction. Barb had no idea then what that meant for her, for them. She had no clue of the seven-year nightmare that was beginning. Because that was not the first time he had relapsed, or the second or even the third…

Daniel wasn’t raised with any knowledge of the Christian faith and had been a drug addict since he was 14. He first got ‘saved’ at 20, but was only looking for a way to continue living how he wanted without consequences. “It wouldn’t have mattered what god was presented to me. I didn’t care if it was Mickey Mouse, Jesus, whoever,” Daniel says. “Whatever was presented as the solution for my drug problem, I was gonna try. But I had no grid for God.”

His teen years were a miserable cycle of heartache, fueled by drugs. In and out of jail, living from town to town, dodging his parents, smoking crack, stealing a family car. He ended up in a Christian rehab. “Granddad owned a Bible store, so my aunt filled my room with fancy, leather-bound Bibles, inscribed with my name. I also spent 2 hours a day in Bible classes. The only thing I remember is a guy who said he was once in my position and found freedom through the Bible,” Daniel recalls.  But hours after finishing rehab, he was back to using drugs.

Daniel went straight to the needle, launching a 16-year heroin addiction, mingled with cocaine and pills.  He had a brief, tumultuous marriage to a fellow drug addict. His criminal activity ramped up and he led a dark, dangerous life alongside dealers and bounty hunters. He stole frequently, but he didn’t care about money, just the drugs. Always the drugs.

Ultimately, he was caught for burglary of a pharmacy. He spent time in jail but because of his dad’s help in court, the judge sent Daniel into a long-term program. It was then God started to encounter Daniel, much in the way a sculptor encounters a solid block of marble. Slowly, surely chiseling away, as something began to take rough form in Daniel’s soul.

He was exploring the Bible and started going to church. He stayed clean over a year before his next downward spiral. He was living in an efficiency apartment, involved in AA, and, after a short season, found himself right back at square one, mentally and emotionally. His default condition? Hopeless. “I had determined I was going to get high,” Daniel relates. “I was obsessing about using drugs, and being down on myself. I just didn’t see this Christian life working out.”

He was bone-weary of the struggle and one night cried out, “God, please help me! Show me something that will cause me to turn from this overwhelming desire to get high!” He was watching tv, and there was some evangelist, jockeying for money, claiming exponential blessing for those giving. Daniel remembers getting mad at God and throwing things at the tv, yelling, “Is this what it’s going to take for you to reveal yourself to me? I have to pay You or is this Your salesman?!”

Daniel knew that the Bible says (Romans 5:5), “The love of God has been poured out in your heart.” That’s the key, he thought, it has been, past tense, but still he had never experienced it.

Then came an encounter in an unlikely place. A friend called at midnight urging Daniel to go fishing at Mobile Bay. But Daniel refused. He was done. Done with AA, done with fishing. He was going to get high. But the phone rang again, and Daniel found himself convinced and heading for the pier and afterwards to the Waffle House.

Daniel could feel the stares of the young, spiked-hair, punk-rock guy sitting in a nearby booth. Soul-piercing stares. He’s probably thinks I’m looking at his girlfriend, he’s mad, Daniel thought, and tried to shrug it off. But as he left and walked by that booth, the guy stood up and said, “God’s been speaking to me about you,” and proceeded to tell Daniel everything he was going through and questioning God about.

“He was reading my mail,” Daniel says, “He spoke about events in my life he couldn’t possibly have known and told me: God is listening.” It continued outside, when the guy asked to pray for Daniel. Right there, 3 AM in the Waffle House parking lot, this young man laid his hands on Daniel’s chest and prayed in the Spirit (in tongues). It was like two electric paddles sending high voltage through his chest and he started praying in the Spirit. “It was like liquid honey electricity flowing through me. The way I viewed God and my spiritual DNA had been changed forever.”

But still Daniel had not reached bottom. After six months clean, he went on a binge that only ended with a roadside rescue by his dad, and a superhuman effort to quit on his own. With nowhere to go, he connected with a woman from church who allowed him into the ministry school she led.

That’s where he met his wife, Barb, and their two stories became one. That’s where hope again turned to heartache. Daniel relapsed after they married and in a desperate attempt to escape his demons of addiction, the couple moved from Alabama to Tennessee to Arizona. But it only got worse. Daniel was making good money but it went to using heroin. Barb was pregnant with their first child and her stress was at an all-time high, as she waited for what felt like an inevitable tragic ending. When opportunity came up to work with Barb’s dad they jumped at it.

But even living in the middle of 400 acres of dense, wild woods in northern Michigan, Daniel couldn’t escape. He spent tens of thousands of dollars, literally having heroin and pills shipped in. He isolated himself, hiding in a cabin or 4-wheeling. When the job-funding expired, they moved downstate. Elijah was born and Barb essentially raised him alone for the next three years. Daniel describes himself as so dope-sick he wouldn’t go around Barb’s family. She carried on bravely in the face of Daniel’s terrifying cycle of rehab, jail, addiction. Finally, Barb asked a pastor for help. Life Challenge was the answer, he said, but Daniel stubbornly refused, promising he would only if he relapsed. When he did relapse and got arrested, that pastor told Barb it was time to leave Daniel. That shocked him into agreeing to go into LC which he (grudgingly) did after 30 days of detox.

“At first, Life Challenge felt like the same old thing,” Daniel says. “See, I had been through it all and tried everything. Jail, probation, halfway houses. Rehabs, counseling, medication. I had overdosed five times and had a heart attack. I even tried neuro-feedback brain scan technology that was supposed to cure me.”

But after about three months in the LC program, he stopped going through the motions. He started to take advantage of what LC offered through the intense Bible curriculum, worship and prayer times. He also started creating his own disciplines, getting up at 4:30 AM to pray and study the Word.

“The beauty of my story is that when God came after me, I was running away from Him rather than to Him,” Daniel recalls. “God included me in the gospel narrative without anything on my part–it was effortless grace. I’m continually reminded that it’s the kindness of God that leads us to repentance.”

As the Spirit and the Word worked sanctification and transformation in Daniel, he found that in those quiet times, a loving God and Father was slowly speaking to the depths of his heart saying, “Son, I enjoy you!”

Daniel notes, “I was discovering that my role in life is that I am a son. Once I stopped searching for my identity in my gifts or my function as a Christian, there was the realization of that higher calling. That’s the restoration of the original creation, when we become what He intended…sons and daughters of God.”

When asked what makes this time different, and how he knows he is free from the addiction (the sin) bondage in his life, Daniel makes a confident declaration,

“Because I finally stopped fighting a battle that Jesus had already won! The old sinful, depressed, drug-addicted Daniel was nailed to the cross, put to death. Jesus didn’t just die FOR me, He died AS me! I no longer have to use drugs again–He’s given me a new reality to live in. I no longer have to try to get to God–He lives in me!”

His relationship with the Savior established and growing, it was also a time to work towards healing in his marriage. Barb had stood by Daniel throughout, yet she dreaded carrying on for another year, struggling financially and emotionally, caring for their two little ones alone. She visited every Sunday, bringing Elijah (5) and Luke (3) to see their daddy. But there was so much heartache and blame hanging over their relationship that it was like sandpaper every time they talked. She didn’t dare let herself hope that this time her husband would finally be free.

Yet Barb started to see glimmers of hope at about the six-month mark. Especially when Daniel started responding to her in a different way, with love and affirmation. When her understandable fears of relapse would give voice, Daniel consciously chose to love her right where she was at. “Barb’s hurt and anger, her sufferings were valid,” Daniel says, “and I wanted to stop making her feel bad. I was starting to process life differently, as a new creation in Christ. I realized that liberation from unhealthy thoughts and actions doesn’t come from my wife and so it wasn’t dependent on what she said or did. We both needed to take our eyes off each other and focus on God.”

Barb started leaving the weekly visits with a sense of wonder, and hope that this new Daniel would be the person she welcomed back home.  They spent the second half of the year-long program repairing and rebuilding their relationship. They received counseling and mentoring as a couple, and worked their way through a marriage-strengthening book (Love & Respect).

Hearing Daniel talk about his wife and children, and what the future holds for them, there is a sense of deep contentment, stability, and joy. Above all he exudes hope. The Lord Jesus, the One Who redeems, took a story that had failure written all over it, to a life, a family, that has freedom written all over it.

Daniel’s new default? Hope. And as Daniel says, “Hope is a Person. Christ in me, the hope of glory.” (Colossians 1:27)