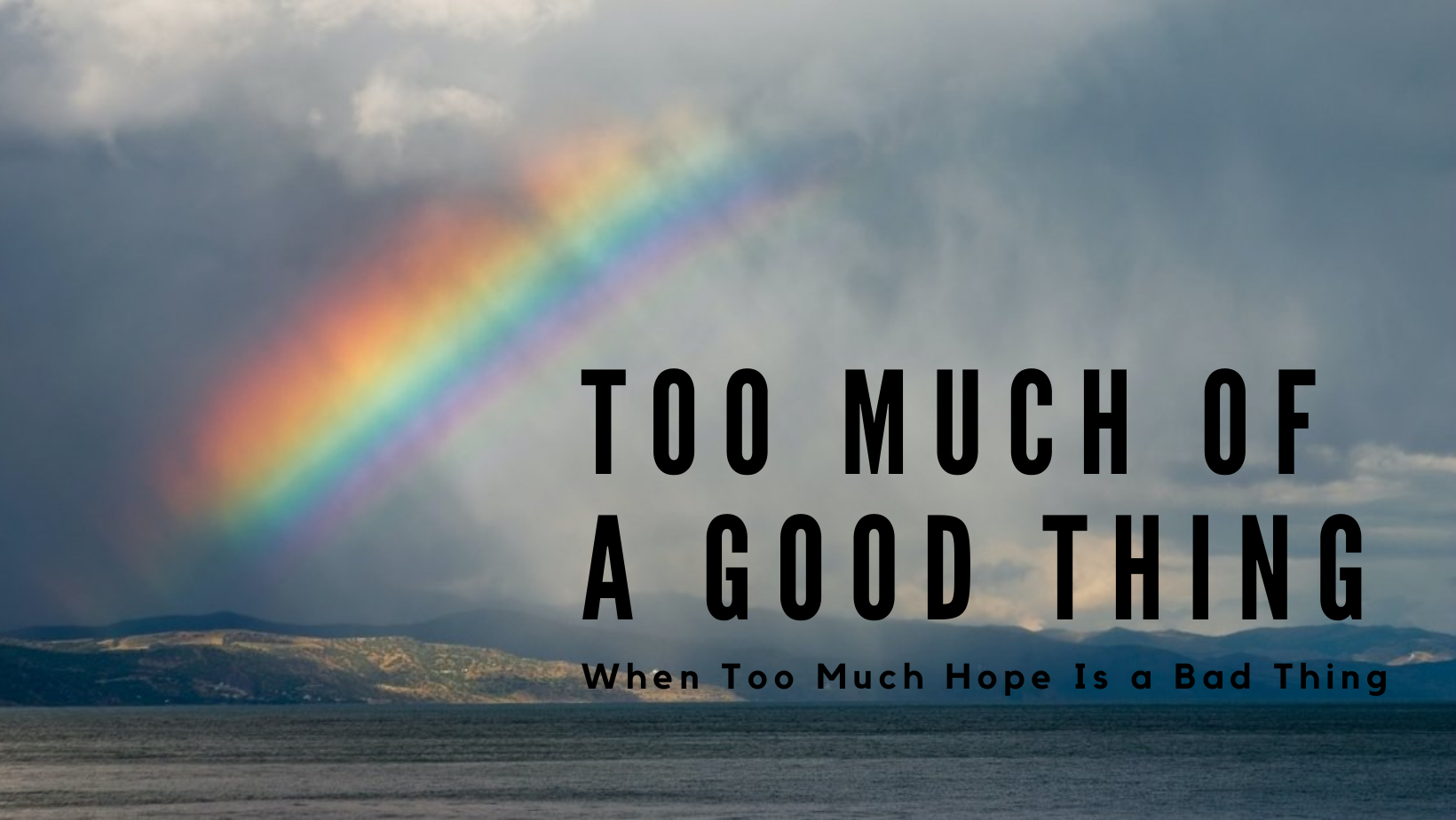 Too Much of a Good Thing: When Too Much Hope Is a Bad Thing

Anyone who has suffered with a drug and/or alcohol problem understands the agonizing reality of trying to “kick the habit.”

The physical urges to use are overpowering. The mind is always racing, wondering when and how and where to score the next hit.

One of our residents once told me that for someone who has never been addicted to drugs or alcohol, one way to understand the power of addiction is by trying to stop eating.

Those who have fasted know how difficult it is to go without one meal. Foregoing food for two or three days—let alone a couple of weeks . . . excruciating!

It is a mistake to intimate that the road to recovery is anything but difficult. The message often peddled in the church is a twisted version of Christ’s words, “Whom the Son sets free is free indeed” which becomes shorthand for, “Just believe and receive your miracle!”

Such counsel given by sincere, well-meaning people is not only naïve but potentially destructive to both addicts and their families.

Recovery is hard and messy—and “tricky”—because addiction is complicated. It is physical, psychological, and spiritual. It is systemic (e.g., social, cultural, economic, etc.). It is habit (involving habituated thinking patterns and muscle memory).

It is also neurological.

In very simple terms, the prefrontal cortex is considered to be the moral center of the brain. It determines good and bad, better and best, and enables a person to select and monitor behaviors. Its capacity to perform properly is largely dependent on successful bonding taking place in childhood. Persons who have experienced violence, abuse, poverty, and traumatic events, especially in formative years, will likely suffer from an underdeveloped internal working system, impeding their ability to control emotions and impulses. Unhealthy neural pathways get created which negatively impact a person’s power of self-regulation.

Choosing which course of action to take is not a matter of simply making up one’s mind. Defunct pathways decide behaviors. Determinism par excellence. Many addicts literally cannot help themselves.

Addiction is disease, disorder, dysfunction . . . “demonic.” It is complex.

A few years ago a young gentleman in our program told me that after about the tenth time using heroin, he could no longer control himself. Each subsequent use weakened his power of choice. By the tenth round, his “chooser” was completely broken.

So, once an addict, always an addict? Is it a lost cause? Are certain persons doomed?

Of course not. We live in a grace-filled universe. Christ’s coming began the reversal of human brokenness. Redemption is at work. Christ’s empty tomb is proof that death does not have the last word. God in Christ is actively renewing all things.

But those who have lived long enough also know that healing seldom looks like what we imagined and does not occur in the timetable we expected.

This is why we must be careful when dispensing hope. Hope is hard won. It does not come without a bloody fight. And it can be long in coming.

A professor of mine who specializes in addiction recovery put it like this: “Too much (hope) too soon can be overwhelming.” He compared it to being in a dark cave for a long period of time and suddenly having the lights turned on full blast. Such would be blinding. In like manner, false hope is harmful and ultimately adds to the despair of one caught in the clutches of addiction.

I cannot say this enough times: Recovery is hard work, and one of the reasons it is so hard is that there are so many battle fronts. Processing pain, addressing physical health, learning new coping skills, working through relational conflicts, experiencing God’s forgiveness, growing in self-confidence, etc. are life-long pursuits and require considerable effort. There is no silver bullet or quick fix.

Recovery goes on until one’s last breath and is full of ups and downs. And while this news may not be received by “happy-hopers,” the sooner an addict realizes and embraces the hard reality, the better off he or she will be. Hope needs to be realistic, given in appropriate amounts at appropriate times.

My welcoming speech to many new entrants into our program goes something like this, “Your ship has come in! Life can be different, better! But it is going to be difficult. You are going to be lying on your bed many nights thinking, ‘What did I get myself into!? I can’t do this.’ You will go through many days muttering, ‘I don’t want to do this.’ Remember, however: You are not alone. You are surrounded by a community of people who have more than one of the ‘T-shirts’ who will walk with you on this important journey.”

We have a saying at Life Challenge: “You can get out of Egypt overnight, but Egypt doesn’t get out of you overnight.” The ancient Hebrews are proof of this.

So maybe the next time someone says, “I can’t stop,” the kindest response might be, “Yes, recovery seems hopeless, but I’m with you.”

That might be all the hope someone needs to make it through another day.

“So I find this law at work: When I want to do good, evil is right there with me. For in my inner being I delight in God’s law; but I see another law at work in the members of my body, waging war against the law of my mind and making me a prisoner of the law of sin at work within my members. What a wretched man I am! Who will rescue me from this body of death? Thanks be to God—through Jesus Christ our Lord!” (Romans 7:21-25)

“We must be careful when dispensing hope. . . Too much too soon can be overwhelming.”