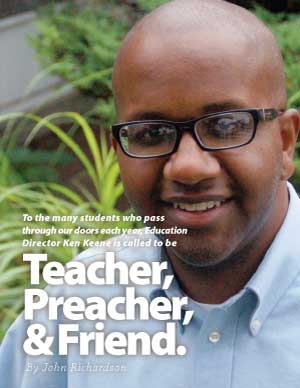 Ken Keene Is Focused On Education

As the Director of Education at Life Challenge, Ken Keene oversees the growth and development of hundreds of students. He administers our core curriculum, the course of studies that every student must complete in order to graduate. It is a systematic presentation of the foundational truths of our Christian faith.

The structure of the instructional system was first laid out by Pastor David Ytterock, Ken’s predecessor. It takes the student through lower, middle and upper growth classes that encompass the entire New Testament and selected parts of the Old. Those who remember David Ytterock will know just how rigorous and demanding this curriculum is. Life Challenge takes seriously its charge of “teaching the elementary truths of God’s word.”  There are no electives and no fluff classes.

But that is not to say that Ken is hard on students. He knows what it means to grow in faith, to struggle, and what it takes to nurture tender roots. He cares deeply for the individual lives and the personal growth of each student. He will do all within his power to help each one succeed.

Born in 1969, Ken grew up on Detroit’s northwest side, near Mumford High School. His father was a pastor and General Overseer of the Church of God, Sanctified. The COG, Sanctified is a relatively small “holiness” fellowship of churches with much of its membership in the south. Ken remembers his childhood as happy and his father as a strong influence on his young life.

After graduation, Ken went to Wayne State University. It was here that new awakenings to the power of the Holy Spirit began to happen.  His boyhood friend, James Striggles, was Pentecostal. Together they went to Pentecostal services around the city. The services were strangely attractive to Ken. He was suspicious at first but, more and more, Ken was drawn.

The church of his father was not in full agreement with the traditions and theology of Pentecostalism. Ken struggled trying to find a firm faith. On the one hand, he knew that there was something drawing him, something new, something important. On the other, he knew that his father would have questions and might not fully approve. Indeed, conversations ensued.  The two discussed the things of God, the new directions and unexpected spiritual interests Ken had developed. After much prayer and questioning, Ken‘s father declared prophetically that Ken was called to ministry. Ken was not so sure.

Finally, inevitably and though he resisted at first, Ken received a new baptism of God’s presence at a revival meeting in 1989.

God was not done. It was a time of great change and spiritual growth for Ken. Something else happened around this time, something that was also destined to change his life. His dear friend James had a wide circle of Pentecostal friends. Through James, God brought to Ken the woman who would become his wife.  Ken liked Rachel immediately. So did his parents; and so in 1992 Ken married the love of his life, a woman he admired as much for her inner beauty and grace as for her outer loveliness and charm.

God was still not done. In 1990, in the midst of all these changes, Ken finally heard for himself the call to ministry. He was scheduled to preach his first sermon at his new home church. Then suddenly, just two weeks before his sermon, during yet another late night discussion, his father was taken. Alone with him in his final moments, Ken felt helpless. Yet in that terrible hour he had the peace and comfort of knowing that his father was now in the presence of God, that he had blessed his ministry and his choice of a wife. Though they differed on certain things, Ken and his father were reconciled.

Ken now began to study for the ministry in earnest. Again, it was through his good friend, James Striggles, that he met another significant influence on his life. James’ mother told Ken about a teacher, David Ytterock, at Central Bible College. She suggested that he take classes there.

Pastor Ytterock saw something in Ken and took him under his wing. Ytterock was a stern but caring task master and Ken loved him. He took whatever classes he could and spent much time with him. When David Ytterock invited Ken to teach Proverbs at Life Challenge, Ken understood that he had finally found a home for his calling.

In 2003, only a month after Ken’s dear friend and spiritual brother, James Striggles, had died an untimely death, Pastor Ytterock was also taken home to be with the Lord.

When Jeff Bonzelaar turned to Ken and asked him to take the reins as Director of Education, Ken knew he was ready. He humbly accepted the mantle of authority. Having been shaped by God for the task, raised up in the faith by a loving mother and father, sharpened by brothers and sisters in the Lord, tempered by his teachers and burnished by the Word of God, he stepped in so that all who know him, may know him as teacher, preacher and good friend.