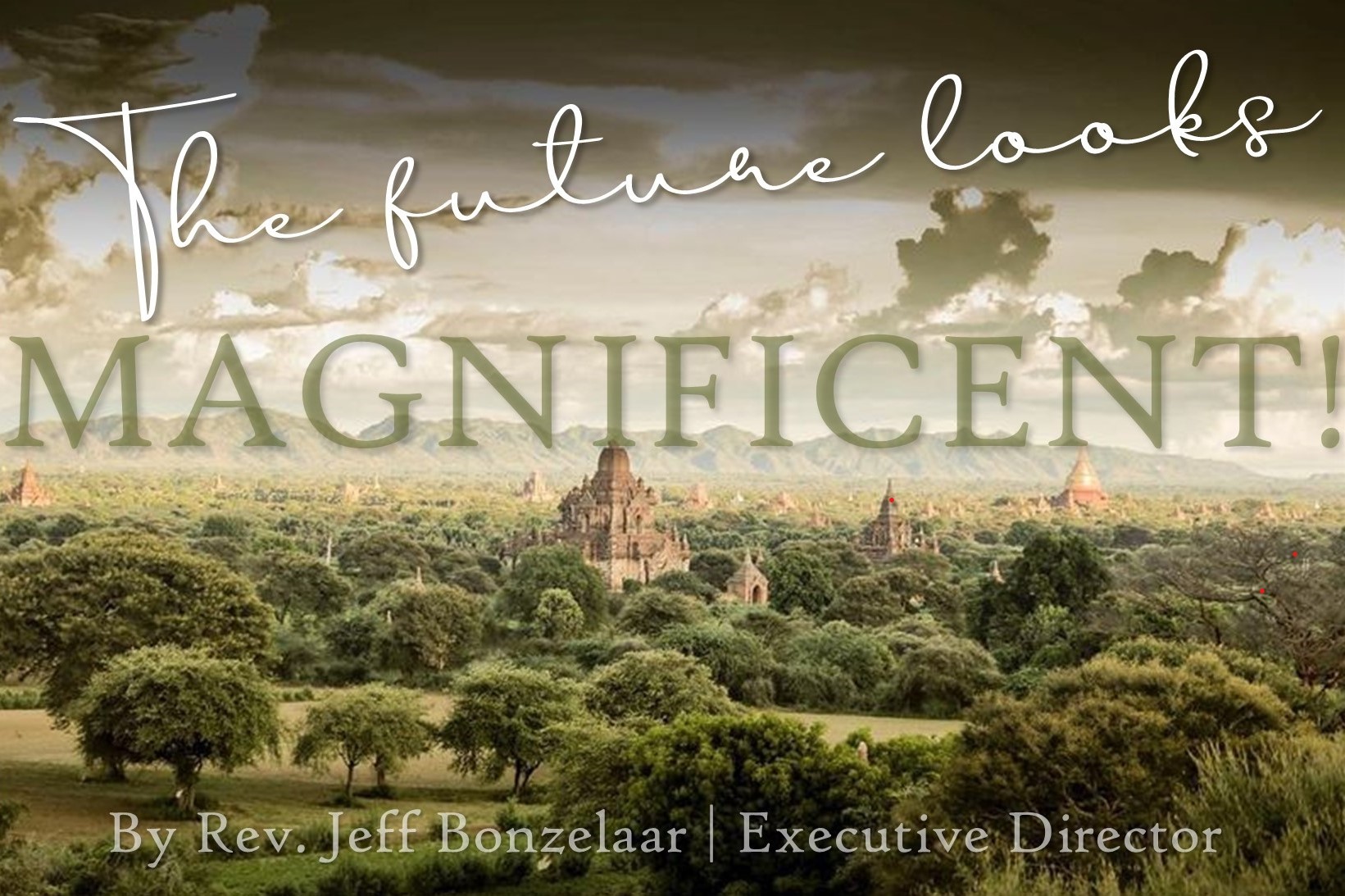 I grew up believing that the world was going to end in a mushroom cloud. Earth would—sooner than later—be destroyed by fire.

History was on a downward spiral. Moral decay, societal deterioration, cultural demise, apostasy,…all to escalate as the final chapter comes to a close. In the meantime, false prophets, plagues, wars, dragons, and the dreaded mark of the beast, 666, to threaten our existence. Finally, when evil reaches a certain predetermined quota, the battle of Armageddon,…the bloodbath of civilization and the eradication of the planet.

Doom and gloom. Smoke and ashes.

The good news in all this was that as things got increasingly worse, we were actually getting closer to the return of Christ. And depending on the version, Christians would either escape all this turmoil or be rescued somewhere midstream.

To go up to heaven for an eternity. Up, up and away.

Really? Is this how the Story goes?

History doesn’t end in a fireball. No, it ends with the
New Jerusalem coming down, heaven kissing earth,
God dwelling with humans.

There is no denying that we are living in troubling times. Racial division. Corporate greed. Sex and human trafficking. Abortion. Poverty. Violence. Indecency. Perversion. Entitlement. Ingratitude.

So much unrest, mistrust, and uncertainty. Politically, socially, economically, and spiritually.

A few weeks ago, one of my neighbors lost their precious daughter on her 21st birthday. Suicide. I’m sure there were several factors involved (not the least being mental illness) that prevented her from envisioning a good future.

Deaths of despair are on the rise. Without question, there is a crisis of hope in this nation. Addiction continues to ravage more and more families. People feel isolated. They are angry. Confused. And afraid. It does, indeed, seem like the sky is falling.

Hope is the fuel, the energy, for the journey.

Without a real, robust hope, we die. Hope is the fuel, the energy, for the journey. As long as we keep hoping, we keep moving. We keep striving. We keep living.

So God gives us extraordinary hope in what might be considered a most unusual place, the book of Revelation.

Perhaps the most misunderstood and misused piece of literature, the last book of our canon is not a book about bleak, end-time scenarios culminating in the world blowing up. It is a letter written to first century churches in crisis struggling to remain faithful in a very unwelcoming, hostile environment. We learn from John the Seer that no matter how strong and hell-bent the existing powers are, no matter how wicked our day is,…God in Christ the Lamb is alive, seated on a throne, reigning, bringing all things under one head, himself.

History doesn’t end in a fireball. No, it ends with the New Jerusalem coming down, heaven kissing earth, God dwelling with humans, with every tear wiped away and death and pain extinguished…Everything made new (Rev. 21:3-5).

History is going somewhere beautiful, wonderful, and infinitely pristine! “The kingdom of the world has become the kingdom of our Lord and of his Christ” (Rev. 11:15). The message of Revelation brims over with glory and praise to God because creation is moving towards reconciliation, redemption, restoration,…goodness, wholeness, harmony, shalom.

The climax of human history is not individual souls evacuating this world but heaven coming down—swallowing up the earth! Instead of destroying earth, God rebuilds, reboots, restores, and renews. Paradise lost is finally paradise found (city style!). Back to the beginning and beyond. Genesis 1 and 2 plus! Blessing, peace, and life replace the original curse and death.

The kingdom of God launched in the life, death, and resurrection of Jesus arrives in its fullness. Humanity and all creation are brought into perfect harmony and eternal joy in God’s presence. The petition of our Lord’s Prayer—“Thy kingdom come, thy will be done on earth as it is in heaven”—is finally answered. The hope of Revelation is not about rapture or going to heaven but about what Barbara Rossing calls a ‘rapture in reverse,’ the descent of God to us!” The Story ends gloriously! Eugene Peterson captures it well, “There is an emotionally and mentally satisfying finish.”

No wonder Revelation is filled, chapter after chapter, with angels and heavenly hosts worshipping God and has inspired numerous hymns and songs of the church (e.g., “Holy, Holy, Holy,” “All Hail the Power of Jesus Name,” “Crown Him with Many Crowns”). In fact, one of the greatest musical masterpieces ever written, Handel’s “Messiah,” was inspired, in part, by Revelation. One such line is a verbatim quote from the text, “And He shall reign forever and ever.” Accordingly, in response to this often-repeated stanza, some 145 “Hallelujahs” follow!

Friend, the future looks magnificent! Drink in the Story-maker’s tonic, and don’t be surprised if you find yourself excitedly singing to the Lord, emboldened with new confidence and hope!

Even so, Come, Lord Jesus!