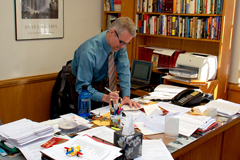 The Biggest Little Word In The Bible

For years I have thought about preaching a sermon series entitled, “The buts of the Bible.” There are many important ones:

The greatest “but,” however, is found in Ephesians: “As for you, you were dead in your transgressions and sins, . . Like the rest, we were by nature objects of wrath. But because of his great love for us, God, who is rich in mercy, made us alive with Christ” (vv. 1-4).

The story doesn’t read like it should. God-hating, sin-loving people deserve God’s condemnation. Instead, they receive his mercy and forgiveness. One commentator writes, “Now if this be a case of syntactical inconsistency, it is one of the most glorious cases on record!”

But because of his great love for us!

There is no explanation for it. No justification of it. Nothing to warrant this divine affection. Nothing that would oblige God to respond with any measure of kindness to those who have belittled his glory and scorned his name. The Bible simply reads, “but because of his great love for us.”

Dead people are unresponsive. They are immovable, impenitent and incapable. They are, after all, dead.

But God broke through. His effectual call triumphed over our hostility towards him. His irresistible grace overcame our rebellious, hardened hearts without which we would have remained forever antagonistic towards him.

The late Harry A. Ironside (1876-1951), a great Bible teacher, told a story about an older Christian who was asked to give his testimony. He told how God had sought him out and found him, how God had loved him, called him, saved him, delivered him, cleansed him, and healed him—a great witness to the grace, power, and glory of God. But after the meeting a rather legalistic Christian took him aside and criticized his testimony. He said, “I appreciate all you said about what God did for you. But you didn’t mention anything about your part in it. Salvation is really part us and part God. You should have mentioned something about your part.”

I once heard someone say, “If there are a thousand steps to God, he has taken 999 of them. That leaves but one for you.” Wrong! God has taken all one thousand of these steps. Your and my salvation are owing to the Lord from beginning to ending.

Christian, what is your testimony, and how do you tell it? Jesus found us (We didn’t find him)! Jesus accepted us (We didn’t accept him)! The ground of our salvation lies exclusively and totally in God. As the prophet Jonah wrote, “Salvation is of the Lord” (2:9).

I like how the old hymn puts it: “I was sinking deep in sin, far from the peaceful shore; Very deeply stained within, sinking to rise no more. But the Master of the sea, heard my despairing cry. From the waters lifted me, now safe am I!”

Think of where you would be…but the Master. But his patience, but his faithfulness, but his compassion. But his love!

Our lives rest on a three-letter word—“but.” There is a God who doesn’t act within the bounds of human convention and reason. There is nothing normal in how he relates to sinners. He doesn’t treat us as we deserve.

Oh the glory of but!

“But God demonstrates his own love for us in this:While we were still sinners, Christ died for us.” (Romans 5:8)