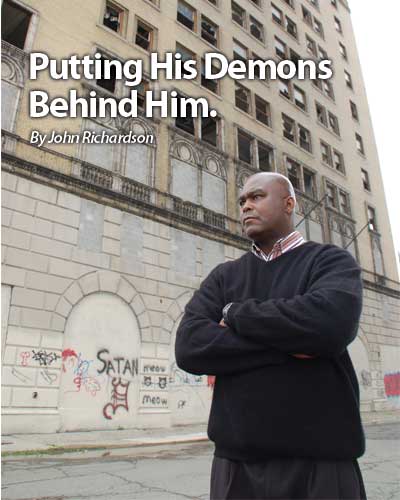 Putting His Demons Behind Him

Leroy Davis stands in front of one of the abandoned buildings on Cass Avenue where he used to sleep. The graffiti tells the story.

It was late in the fall, mid-morning, when excited shouts went up and down Third Avenue around the Tumaini Center, a 24-hour walk-in shelter that serves the chronically homeless. “Cat Fight! The ho’s are fightin’! Look at the ladies fight!” A crowd, mostly men, quickly gathered around two women who squared off in the street. The men came from the huddled groups that always lined the sidewalks in front of the shelter, waiting, hustling, looking for help. Drawn now by the noise and the shouts, they came from blocks away and jostled into a moving ring around the women – everyone except the prostitutes came. They were too wary.

When the fight broke out, the two women just spat, grunted, screamed, clawed and kicked at each other in the middle of the street. Leroy Davis was one of the first to get there, to cheer them on, “Ha, ha! Bite her! Yank her hair! Oh man, look at that girl wail!” The whole scene was a welcome distraction from an otherwise routine day in the Cass Corridor.

One of the girls flashed  a kitchen knife from under her coat. Instinctively, like a cat’s eye, the circling crowd dilated in fear, giving wider berth, then contracted quickly again, sensing death. The knife-wielding girl suddenly launched herself wildly, slashing and stabbing with the weapon. Again and again she lunged forward. She was merciless. The over-matched girl finally crumbled and fell to the street. Her hand went up defensively, “Please don’t stab me anymore,” she begged. She lay down on her side, looking round at the faces in the crowd. As the life slowly drifted out of her, she moaned and whimpered until there was no breath left.

Most of the crowd had already walked away, quickly, as soon as she fell. Others, like Leroy – almost senseless anyway from drug addiction and exposure – just stood there, staring at the dead girl. Someone from the Tumaini Center called an ambulance. The paramedics finally came and took the body away.

It was a turning point for Leroy. He tells the story only to mark a “before and after” for his life. Before, he had bounced around, hustling in the Cass Corridor for 10 long years. Moving from shelter to shelter, from abandoned building to abandoned building, from flophouse to flophouse. Like everyone else locked in the Corridor, he moved around as the demons directed, as survival instincts demanded, as fear dictated, looking for drugs, warmth or the occasional meal. After, well, after is a different story.

Desperate, Leroy turned to the one man he feared and respected the most, Pastor Henry Covington. Covington is the man who started I Am My Brother’s Keeper, a ministry for the homeless. He held services in an old, dilapidated church, Pilgrim Church, at Brainerd and Trumbull. This is “the church with the hole in the roof” that Mitch Albom wrote about in his best-selling book, Have A Little Faith. Covington, a former addict and dealer himself, welcomed Leroy as he always had. But he could sense something new, something different, in Leroy’s eyes. It was a determination he hadn’t seen before. Leroy came right to the point, “I just need to get out of here,” he said. Covington agreed.

Leroy was acquainted with Life Challenge because our students and staff go to Pilgrim Church once a month to help out at I Am My Brother’s Keeper Ministries by serving in the kitchen. Life Challenge also has frequent Sunday morning rallies at the church. “Life Challenge always showed the joy of the Lord whenever they came down,” Leroy remembers. One evening while serving in the kitchen, one of our students, Chris Mosely, noticed Leroy. Chris asked him, “What can I do?” Leroy said he wanted the joy he saw in Chris.  Chris gave him the Life Challenge telephone number, “just call,” he said. It was Henry Covington who gave him encouragement, his blessing and the phone.

Life Challenge picked Leroy up in a van and drove him to the Pierson Center. “When we pulled up and I first saw Life Challenge, it was so beautiful, the grounds, the birds, the flowers – in the Cass Corridor you see none of that. I thought I was in heaven and I fell in love.”

Leroy graduated last month. He finished strong and plans to go back to I Am My Brother’s Keeper to help out. While in the program, Leroy learned to read and write. More importantly, he learned to know and trust the love of Jesus Christ. We are pleased to make Leroy the first annual recipient of our Brandon Baggett Scholarship, which pays his full tuition of $700.  His only debt now is his debt of gratitude to Christ Jesus, a debt he knows he can never repay.