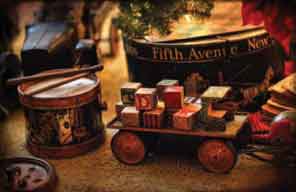 My youngest, Johnny, made his annual trip with Grandma to Toys R Us in an effort to complete his 2011 Christmas Wish List. He identified 26 items as “wanted.” These include Legos, Star Wars action figures, video games, movies, Nerf darts, a recoiling battle tank,

Some might question Lori’s and my parenting for allowing Johnny to have a wish list in the first place: “You are feeding his materialistic bents and fueling his self-centeredness. You should take your Christmas money and buy presents for the poor.” Probably.

It is a challenge here in America to live simple lives. Being content and not desiring more is a daily battle. On top of that is the challenge of teaching my children generosity and concern for others when each one of us is by nature selfish. Tough business.

So you may ask, “Why do you permit this ‘sinfulness’?” Because I want Johnny to know that he has a mother and father who love giving to him. I want Johnny to be confident that Lori and I have hearts that are favorably disposed towards him.

Christmas is a time when we are reminded afresh that God is rich in kindness and great in mercy: “For God so loved the world that he gave his one and only Son” (Jn. 3:16). “He who did not spare his own Son, but gave him up for us all—how will he not also, along with him, graciously give us all things?” (Rom. 8:32). The Father’s generosity knows no limits.

There is a story (probably apocryphal) about famed Emperor Napoleon Bonaparte. After a long and brutal battle, he and his army conquered a highly prized Mediterranean island. As Napoleon and his generals were sitting and drinking, savoring the victory, a young officer came up and approached him. When Napoleon asked the man what he wanted, the man looked straight at him and said, “I want this island!” At this, the generals began laughing and mocking the young man, until Napoleon asked one of them for a pen and paper. To their utter amazement, he wrote out a deed to the island, signed it, and handed it to the bold, but lowly soldier. “How could you do that?” asked one of his generals, “What made him worthy to receive this great island?” Napoleon answered, “I gave him this island because he honored me by the magnitude of his request.” The young man perceived a gracious heart and requested accordingly.

Thank you for all your love and support through the year. Merry Christmas and Happy New Year!