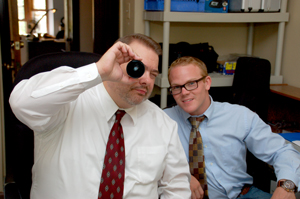 With the help of the always-glad-to-see-you Steve Stuart and the recently recruited, social media savant, Justin Strobel, Life Challenge is now able to reach a wider, more engaged audience with a message of hope.

Outfitted with several Macs running a full complement of software for graphics, photography and video, Life Challenge now boasts a real multimedia department with some very talented people leading our efforts. Since January of 2010 Steve Stuart has been the main man, learning new software and putting it to good use for things like our e-newsletter, our video production and our new web site (www.lifechallengesemi.org). Steve has now been joined in the communications area by a recent graduate of the program, Justin Strobel. Justin brings professional video production experience and raw creative talent to the mix.

We’ve gotten plenty of positive feedback from their efforts and we’re grateful for all the support.

Steve’s life is very different now from what it once was. As a graduate and a recommitted follower of Jesus Christ, he’s rediscovered joy in his life. But, as a staff member and a full-time resident at Life Challenge, the creature comforts are gone. Before coming to Life Challenge Steve was a highly sought-after wedding photographer. He had all the trappings of success: money, a big house in the suburbs, an important position at the church, a loving wife and kids.

He had conned them all.

He was able to hide his alcoholism with a quick wit, a hail-fellow-well-met personality and natural charm. In truth, these were just tricks, techniques he had honed from early childhood. His mother gave him up to a succession of foster homes, then a stint at a state-funded reformatory. He learned early how to get by, even prosper, without the conventions of education and “good breeding.”

His life was a con, a cover up, and he knew it. The more he got away with it, the better he got at it. Finally, inevitably, the web of lies unraveled around him and down he fell. “I ended up sleeping on the floor of my office, drunk, broke and helpless. I had watched my family leave, my business crumble and my life slip into oblivion. Life Challenge was the last chance for me.” Steve sailed through the program and could have resumed his career after graduation, but he is here, in the multimedia department, putting his considerable talent, wit and charm to good use. He’s giving back.

Justin is another story. An accomplished singer/songwriter, video artist, designer and athlete, he was blessed with more talent than he could handle. He showed his talent early. By age 11 he was exploring video stop-action clay animation. He began taking classes in television and video production in high school. He won a hockey scholarship to Liberty University to study broadcasting. He enrolled at Specs Howard School of Broadcast Arts. He got a job at the Aramaic Broadcasting Network (Yes, Aramaic), a Christian Arabic TV station in the Detroit area. He worked his way up to on-air talent delivering the news.

But those are just the good parts. In between accomplishments he got drunk, high on illegal drugs, addicted to prescription meds, kicked out of his parent’s house, arrested for DUI (marijuana), thrown in jail for probation violation and, finally, suspended from his job for horribly mangling an on-air news report while coming down from “performance enhancing drugs.” It was a meteoric career, he burned brightly for a short time and then fell to earth with a disappointing thud.

Though Justin’s year as a student was, shall we say, patchy, in the end, like thousands before him, he found out that he is loved by Jesus and that he can finally find rest in His arms. After his internship, Justin has plans to go to Australia to attend the Hillsong International Leadership College. It’s a perfect fit for him.

Creativity in all its forms is a little bit of God-likeness. God has certainly blessed us with the creative talents of Steve and Justin. We look forward to their service – the fresh, new ideas they will bring in the weeks and months ahead.

Giving back. It is one of the profound beauties of our faith. Love finds both its highest and its deepest expression through the service we give when we are called to serve Him who first served us.