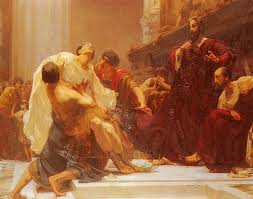 Two years ago I ran a 5k race in Orlando, Florida. This was a small, informal event put together by a few Christians for the sheer pleasure of enjoying an early morning run with other brothers and sisters.

No matter. Any time there is winning and losing involved, I can never seem to “just have fun.” My competitive instincts kick in, and I go all out.

This morning was no exception. When the start was announced, I darted off like a deer being hunted by the Russian army. Images of Rocky Balboa on the steps of the courthouse in Philadelphia flashed through my mind. I was going to show the world that Jeff Bonzelaar—middle-aged and all—still had it. (I doubt that any of the other 30 runners were thinking in such serious and vain ways.)

Less than 20 minutes later (my estimate . . . no official time was kept), I crossed the finish line—second! Aside from nearly passing out from heat exhaustion, I was ecstatic. I went back to my hotel room, got my cell phone, and made a call. Not to my wife.

Not to one of my sons. Not to a friend, but to my dad. He was the first person with whom I shared my triumph. As I reflected on that moment months later, I learned something about myself. I may be pushing 50 and have a family of my own, but I still covet the attention and admiration of my father.

And I don’t think I am the only one.

Whether we are young or old, male or female, there is a need within each one of us to know that we are loved and accepted by a father. We all yearn for a strong man we can count on to be there for us, to look after us, to want us, a man who invites us to draw near to him and rest in his powerful but gentle love.

The absence of such can lead to problems and pain of all sorts. Author Richard Louv goes so far to say that, “fatherlessness may be the most dangerous social reality of our time.” Fatherlessness itself is not the main problem, as Louv argues. Rather, it is a loss of fatherlove.

This is where the good news of the gospel comes in. Jesus Christ came to show us the Father and enable us to have a personal relationship with him. Jesus died on the cross so that we could be forgiven of our sins and adopted into God’s family as sons and daughters. “But when the time had fully come, God sent his Son, born of a woman, born under law, to redeem those under law, that we might receive the full rights of sons” (Gal. 4:4-5).

George MacDonald was right when he said, “The hardest, gladdest thing in the world is to cry Father! from a full heart.”

The fatherhood of God is one of the most dominant themes in the New Testament. God is referred to as “Father” no less than 176 times in the Gospels (114 in John alone). In addition, Paul refers to God as Father 45 times in his epistles. In fact, in each of his letters, he opens with a statement of God’s fatherhood (e.g., “Grace and peace to you from God our Father and from the Lord Jesus Christ,” Rom. 1:7).

I point this out because whether or not we have had a good father figure in our life, we all need to know the love of the heavenly Father. No earthly father can fully satisfy the longing of our soul to know that we are safe and secure, cherished and prized, by a strong, wise, and caring Father.

God the Father desires to enter those dark places and redeem them for our good and his glory. So open yourselves to his touch and trust him for his grace. He will send the Spirit of his Son into your heart so that you might call out, “Abba, Father” (see Gal. 4:6).